Eve Roberts recently took a soul-searching journey with Finland’s masters of melancholy metal – HIM. The band toured Australia and New Zealand in late March - their last stops on a worldwide tour that followed the release of their latest album, Venus Doom.

In a Sydney harbour hotel room, two coffee cups sit on a table, next to a paperback of Edgar Allan Poe’s poetry and a pack of Marlboros. Across the table, behind a cloud of cigarette smoke, I see Ville Valo lean forward to pour himself another black coffee.

“I don’t believe in the existence of soul,” says Valo, lifting his head up. Under the brown gatsby hat, his intense gaze reiterates his point. “I believe in soulful things but I don’t have a soul to search.”

Valo is the singer and songwriter of HIM. The other coffee cup belongs to Migé, HIM’s burly bass player.

I check Migé’s ghoulish chest X-ray T-shirt for evidence of soul between the bones, but there is nothing. Yet, he is more upbeat about it.

“I think who delivered the final blow to the word ‘soul’ was James Brown,” says Migé, an impish smile escaping through his long lanky hair. “He’s a fine man but he annihilated the word with his insane behaviour.”

These are intriguing words coming from members of a band that for 15 years has performed songs about dark tortures of the soul. Anguish, loneliness, love and death have been the essence of HIM’s music, and these themes were explored with a gloomy edge in their latest album Venus Doom.

But if there is no soul, then why does the song “Sleepwalking Past Hope” lament that we are forever lost in our soul’s storm? Why does “Cyanide Sun” try to separate souls entwined in labirynthe lies?

“Introspection is very healthy at times,” explains Valo. “What can be more fascinating than the everchanging relationship with yourself.”

“I was a moody bastard when working on Venus Doom, so it turned out to be a fairly gloomy album,” he admits, lifting his elaborately tattooed arm to take another drag of his cigarette. I notice two thick silver rings on his middle and ring fingers. “I went through a lot of shit and I don’t have anybody to cry to. I don’t have any shoulders so my guitar works as my shoulders.”

Venus Doom holds the mirror up to Valo’s state of mind, but it also offers a clue as to another element at play. The album’s booklet expresses gratitude to Promises, Malibu – a renowned alcohol addiction centre. In previous interviews, Valo acknowledged his addiction, which saw his health deteriorate prior to going into rehab in 2007.

He is drinking black coffee now, and I leave that part of Valo alone.

It’s just as well because Valo puts a premium on people’s imaginations rather than his private life.

“I have my personal meaning to Venus Doom,” he replies when I ask about the album title. “That remains personal since I don’t want to spread my personal ideas like a virus. It’s good to have people’s imaginations at work.”

Valo recalls coming across people with astrological interpretations of the name. I mention that I see it as a metaphor for femme fatale – a dangerous temptress.

“You’ve got to give a story a good 30 years to be able to create as many interpretations as possible before you actually give the story away,” says Valo. “And when you’ve lived with your interpretation for enough of a time then that is your truth and it doesn’t really matter what the artist’s truth is. That’s art, and if we can be a part of it – pop art – that’s always a bonus.”

HIM holds a distinctive place in the realm of pop-art, due to their blend of emotional lyrics and intense metal sounds. A musical potion of soft and hard, of good and evil. What Valo calls the yin-yang theme has also been reflected in HIM’s album titles, most recently with Venus Doom, but also going back to Dark Light in 2005, and 1999’s Razorblade Romance. And the reason for this mixture?

“Soulful transgression happens through, at times, very violent means,” Valo explains. “I don’t believe that looking for truth has to be something peaceful, that you’ve got to be meditating upon things. You’ve got to ******* shove your fingers in the electric socket and see what happens. And then do it all over again.”

Migé, responsible for HIM’s piercing bass tunes, agrees. He doesn’t see the point of meek soul-searching. “These soul searching tapes that you need to buy,” he says, “the kind of new age stuff that people for some reason think is for soul-searching. It’s not for that, it’s for pot smoking.”

Valo laughs, “Pot-smoking can be soul-searching as well.” Then he reiterates that he has no soul to search. And I am curious - if there is no soul, what is there?

“Do you mean that a person would need a one centre, like heaven? A goal in their life, or a centrepiece?” he asks.

Not necessarily, I say, slightly on the defensive. A soul can be anything to anyone.

“With me,” he continues, lighting another cigarette, “I use the word ‘clarity’ for soul. Understanding why. Journey is more important than actually getting there.”

Valo is right – we could sit here forever, searching for obscure answers amidst the haze of cigarette smoke.

For now though, Valo and Migé are content where they are, looking forward to heading back to Helsinki after almost eight months of touring.
“We’re pretty tired,” says Migé, taking a sip of his coffee.

“When we get back home, we’ll relax for a bit and start writing new songs,” Valo picks up his Marlboros and book of poetry. “I want to be surprised by a melody I haven’t come across yet.”

With a cheeky grin, he adds, “And, I’ll be doing some soul-searching.” 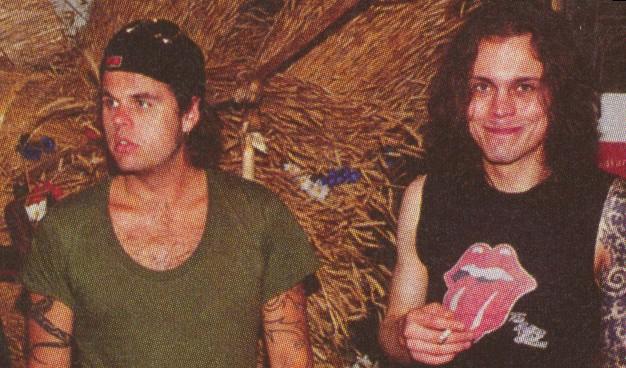 ), Fancy Killer, InJoyAndSorrow... I to je, ja mislim, to