Commie:
Someone Tried to Use Windows 10 with Just 192MB RAM, and Yes, It Works 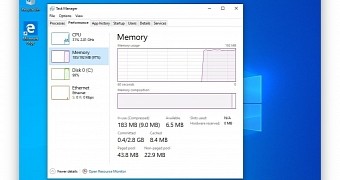 Linux is often described as the better way to go for older computers, as there are so many distributions that only require modest hardware specifications, but this doesn’t necessarily mean Windows 10 isn’t a good option.
And someone has just conducted an experiment to determine just how low Windows 10 can get in terms of RAM resources, with Microsoft’s operating system installed on a virtual machine whose resources have been gradually reduced to determine Windows 10’s reliability.
Sakura Nøri on Twitter started with 512MB RAM, which is half the minimum requirements to run Windows 10, and everything worked perfectly in a VirtualBox virtual machine, only to discover that with 192MB RAM, everything runs flawlessly.
Of course, flawlessly doesn’t mean snappy, so the operating system itself feels extremely slow with such a reduced amount of RAM, which means pretty much everything takes more than a few second to load.
On the other hand, if you drop to 128MB RAM to run Windows 10, the operating system fails to load and crashes with a BSOD at boot.
Recommended specs
The experiment was conducted on Windows 10 version 1909, or November 2019 Update, which right now is the most recent stable build of the operating system.
While you obviously can’t use Windows 10 on a daily basis with such an insanely low amount of RAM, this experiment shows that Microsoft has indeed optimized its operating system for a wide array of device configurations, making it a decent choice even for lower-spec PCs.
In the meantime, if you want to run Windows 10 smoothly, you need at least 1GB RAM, according to Microsoft itself, albeit most people agree that 4GB or 8GB is the lowest you can get for a perfectly smooth experience from one end to another.

Linux radi i u 16mb rama