Top 5 reasons that your ping is so high
1. Internet service provider quality
It’s not necessarily top of mind when it comes to gaming requirements, but sometimes choosing one internet service provider (ISP) over another can mean the difference between winning and losing a game. And if you’re playing in a league or for actual prize money then the stakes are even higher.

ISPs don’t necessarily offer the exact same services and features, and there are multiple factors to consider - including price, speed, latency, reliability, availability, data, and more.

When most ISPs talk about their speeds, they’re referring to download speeds. For instance, an ISP may offer a plan with 50 Mbps (megabits per second) - the measure of how much data can be moved in a second - which most likely refers to download speeds.

Within that same plan, the maximum upload speed could be a much lower 1 Mbps. While upload speeds of 1 Mbps may work for most online games, ideal upload speeds for multiplayer or certain tournament games or for live streaming run closer to the 3 Mbps range.

Another thing to consider is the transmission method. Your ISP may connect you to the internet through a regular modem, a cable modem, a local area network (LAN), digital subscriber line (DSL), or fiber. For gaming, fiber is ideal out of all the options as it’s reliably fast and enables very low latency. But if fiber is not available, then cable and DSL connections work well for high-speed connections as well.

While the equipment that many ISPs offer usually suffices for standard internet usage, it may not always be enough for your gaming needs. You may need to upgrade your equipment, especially if you have three or more devices connected to the internet.

The quality of both your modem and router can impact the speed at which your network runs. Your router, in particular, is the important switchboard for the connections of all your networked devices. The default one that your ISP provides might not be fast enough for the connections you need. Be sure to check if it’s an older, and potentially not powerful enough, model.

In addition, check to see if you have other devices connected to your router, as you may be adding latency to your gaming sessions. Multiple devices, particularly those that are used for playing video games and streaming, use more bandwidth. If you connect your computer directly to the internet, you’ll likely notice lower latency and speedier connections.

What can you do about it?

Use Ethernet cables to connect your computer as well as other gaming devices directly to the router if you have gigabit Ethernet ports on your router. Not only are they relatively inexpensive, but they also help maintain fast, direct, stable, and low latency connections.

Your ISP provides you with either a particular amount of data per month (data caps) or unlimited data. Data needs differ depending on requirements. For the most part, 100GB per month is usually enough for gaming requirements. But if you are downloading new games or video streaming, then you’ll need more. For instance, if you anticipate that you’ll be downloading several new games regularly, then it might make sense to get a plan that offers at least 500GB or unlimited data.

Plans with unlimited data, however, may have asymmetrical speeds, meaning upload and download speeds are not equal. As a result, that could negatively affect latency.

What should you look for?

For most gaming requirements, broadband connections of at least 25 Mbps download speeds should be fine. But for more intense gaming needs, 1 Gbps and unlimited data is really the ideal.
2. Internet connection speed
In addition to the various factors that comprise the quality of your ISP, your internet connection speeds can affect your ping (or latency). A higher connection speed lets you send and receive data faster, thus lowering your ping. Conversely, a slower connection speed can result in high ping, which in turn makes lag more noticeable when playing games online.

Satellite, cable, and fiber connections offer high speeds, but only cable and fiber offer low latency. A dial-up connection with a 56k modem, for instance, will have a higher ping compared to a good broadband connection.

Although most ISPs do offer discounts for bundled three-in-one services (or more) such as internet connection, telephony, and TV, try to avoid signing up for multiple services on one line as it will negatively impact your online connection times and latency.

A fixed-line, wired connection enables more consistent data flow than wireless connections, resulting in lower latency as well as smoother gameplay. It also ensures that other computers won’t be using the internet at the same time and taking up bandwidth.

Most ISPs will offer a few options for connection speeds at different prices. If you’re not able to upgrade your connection speed through your current ISP, then you may want to think about switching ISPs to one offering faster speeds.
3. Inadequate bandwidth
Bandwidth needs for gaming aren’t as important as other features such as connections and network efficiencies. However, you do need to ensure that you have enough bandwidth for your requirements.

If you’re streaming games, for instance, you’ll need to ensure that you have enough bandwidth for uploading. Insufficient bandwidth will affect the amount of time required for data to be sent out and then back, resulting in high ping (latency) and, most likely, lagging during your game.

While ISPs publish their bandwidth amounts, they usually don’t include latency information. One of the reasons is that it may be difficult to declare consistent amounts across different setups and geographical areas. As we mentioned earlier, upload speeds of 1 Mbps are okay for most online gaming, but ping rates are more crucial to dealing with latency issues.

Your latency can also be affected by other users and devices connected to the internet in your household, especially if they’re streaming services, streaming video, or downloading large files. The more devices that are connected and tapping into your internet connection, the higher your latency.

Run a test to check your bandwidth

To determine if you’re getting adequate bandwidth, check out this free site called Speedtest which is run by a network performance company. It lets you test your current ping, download speed, and upload speed. If you are not receiving the speeds that your ISP promised, then you can let them know and ask them to optimize the speeds.
4. Firewall configuration
Since your firewall checks most of the data packets that your computer sends and receives, this process can end up taking more time than necessary. Even if that time is measured in seemingly inconsequential milliseconds, it can slow down internet connection speeds and lead to high latency.

If you’re looking to reduce latency, you may need to disable any Windows firewall or virus guard firewalls such as Norton, McAfee, and others. Disabling firewalls that directly monitor web traffic, in particular, will lower your ping.

You can make your game an exception to the firewall

You can then add your game as an exception within the firewall settings, configuring it so that the ports for the game are open to traffic. Doing so will stop the firewall from treating the game like an intrusion attempt, and will allow your computer to send data to and from the game.

Pro tip: keep in mind that this might expose your system to risks, albeit temporarily.
5. Geographical location
The distance between your system and the server can mean the difference between experiencing low latency or high latency. If you can, choose a server that is geographically closer to you. Doing so lowers your ping because it reduces the amount of time it takes for a data packet to travel between yourself and the server.

For example, it will take more time for the data packet to travel between a player who is living in the United States and is attempting to connect to a server in Germany compared to a player connecting to a server in their own country. The ping will be higher in the former situation than in the latter.

Another area where location makes a difference in latency is if you happen to be gaming on a WiFi connection. Not only should you make sure that you are close enough to the router to get a strong signal, but you should also ensure there is nothing next to the router such as a wall, closet, or large electronic equipment like a TV that could interfere with the signal. This could help lower your ping. 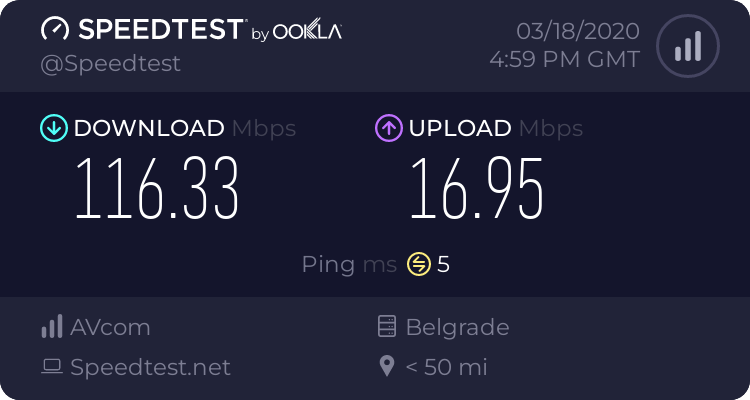