Zelensky has to consider petition to ban the Ukrainian Orthodox Church​

President Zelensky (right) is getting more and more involved in church affairs. In a petition, it is asked to forbid the Ukrainian Orthodox Church, because its connection with Moscow.

Ukrainian President Zelensky has to consider a petition to ban the Ukrainian Orthodox Church (UOC) in the country. An appeal to do this has collected 25,000 signatures in less than a week. With this, the church issue is getting more and more political.
According to the Russian press agency Interfax, Andrey Honcharenko is the petition’s author. He is a deputy from the European Solidarity party. Another demand from Honcharenko is that Kyiv stops the lease agreements with the UOC for all properties, SPZH reports.
The Ukrainian Orthodox Church is independent but “canonically” still connected to the Moscow Patriarchate of the Russian Orthodox Church (ROC). The UOC cannot change that. But the church acts as if it is fully autonomous.
The accusation against the UOC is that it is nothing more but a branch of the Russian state. It is debatable whether this is so since the church is speaking out against the Russian invasion and occupation.
Honcharenko not only posted an appeal about the church but also tabled a bill in the Parliament to ban the UOC. Such a proposal had been there before, but the Speaker decided to block it because it was improper to speak about such an important issue during wartime.

In the past few days, many Ukrainian media gave attention to an interview with the Ukrainian state official Elena Bohdan, head of the State Service for Ethnopolitics and Freedom of Conscience. According to her, it would not be wise to ban the UCO during this time of history. “This could lead to conflict and destabilise the situation in Ukraine”, the Institute of Religion and Policy reports. suplementi
Bohdan. Still from video
Bohdan agrees that there is a “risk” with the UOC that it has ties with Russia. However, its official policy is to protect the independence of Ukraine. But on the other hand, she said many UOC believers “volunteered at the front”. “Many UOC priests blessed the believers to go to the front. In the churches of the UOC, people prayed for Ukraine’s victory.” According to her, just 1 per cent of 10,000 priests might be in the hands of the Russians.
An alternative to the UOC for Orthodox Ukrainians would be the Orthodox Church of Ukraine (OCU). This is a new church, planted in 2019 under the leadership of President Poroshenko, that is connected with the Patriarchate of Constantinople. It is not clear what percentage of the country belongs to what church.

The church issue is attracting more political attention. Last week, the Ukrainian security services SBU raided Kyiv-Pechersk Lavra, one of the main Orthodox monasteries in the country and the headquarters of Metropolitan Onuphry. Also, other church buildings were searched. 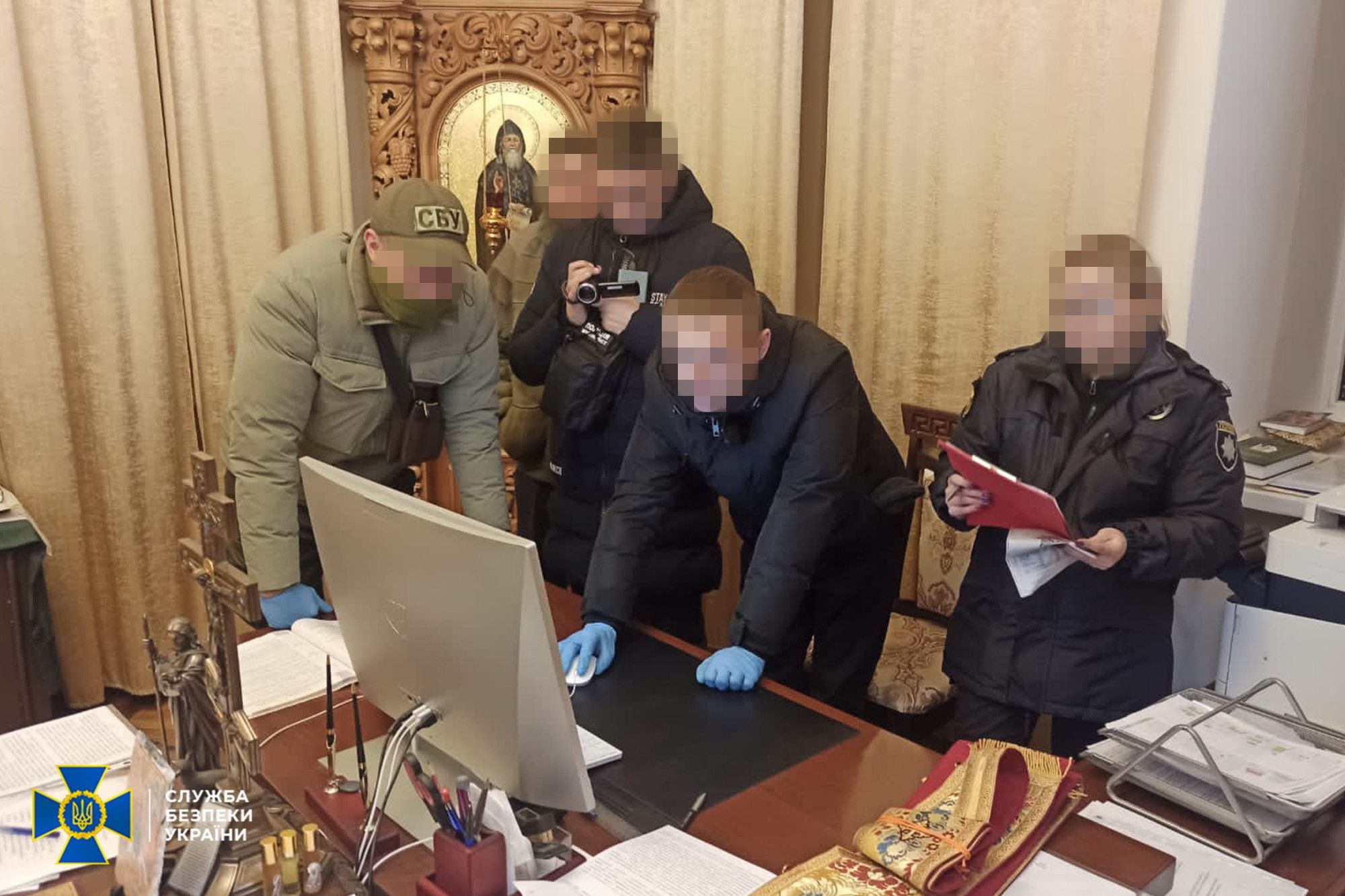 Raid in church office last week. Photo SBU
According to a news release from the SBU itself, the police found several documents that deny Ukraine’s right to exist, since it is a part of Russia. This will lead to at least two criminal proceedings. Remarkable is that the findings were done in the country’s west, which is seen as the ‘least Russian’ and more Western.
According to Metropolitan Meletiy, the police acted with brutality when they entered his home and office in Chernivtsi in the south-west of the country. One of the agents would have said to him that he better could “join the OCU”.
Meletiy denies that he applied for a Russian passport in 2007. According to the SBU reports, they had found such a form in his office. The bishop says they have planted it there to blame him. 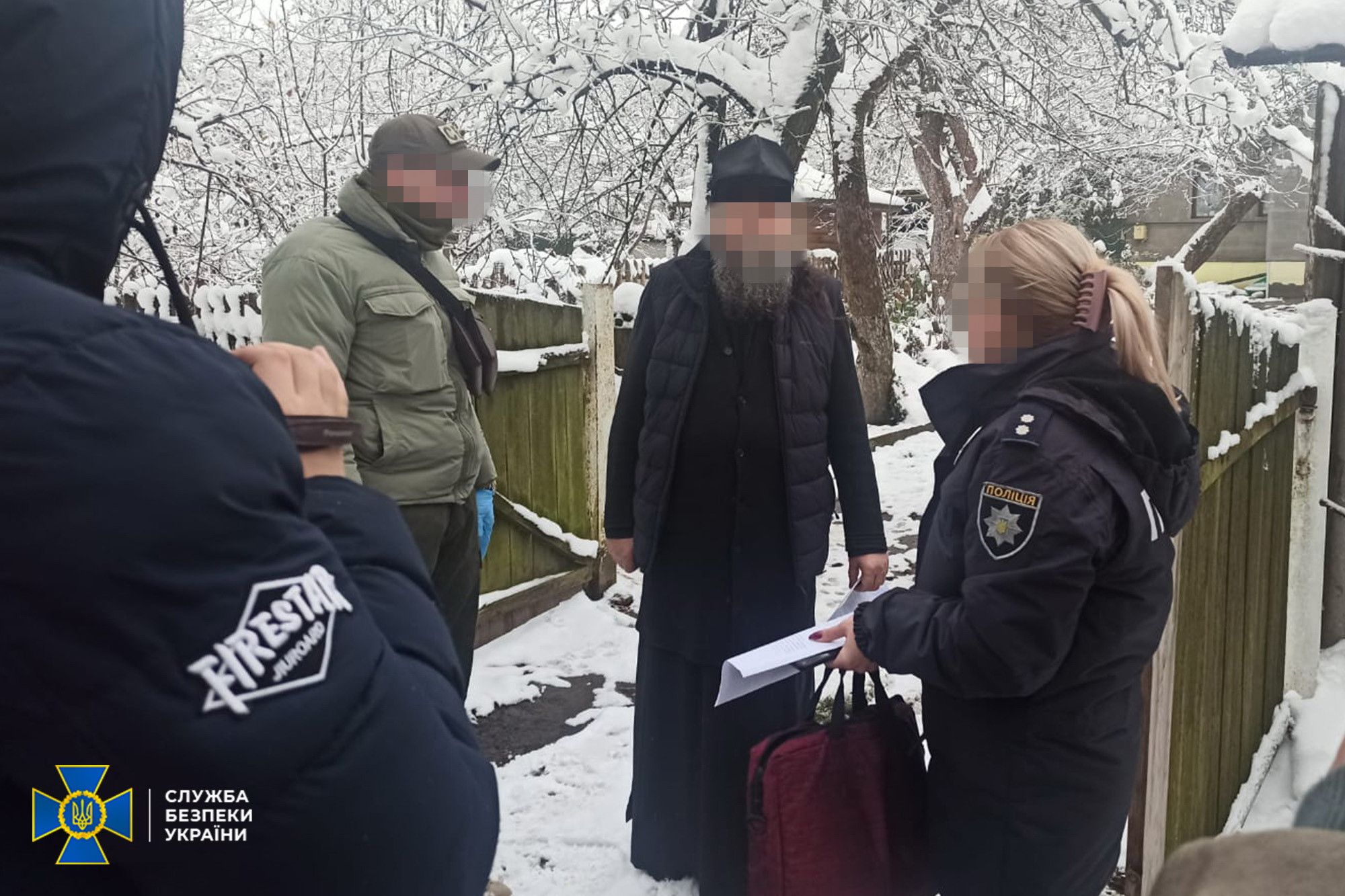