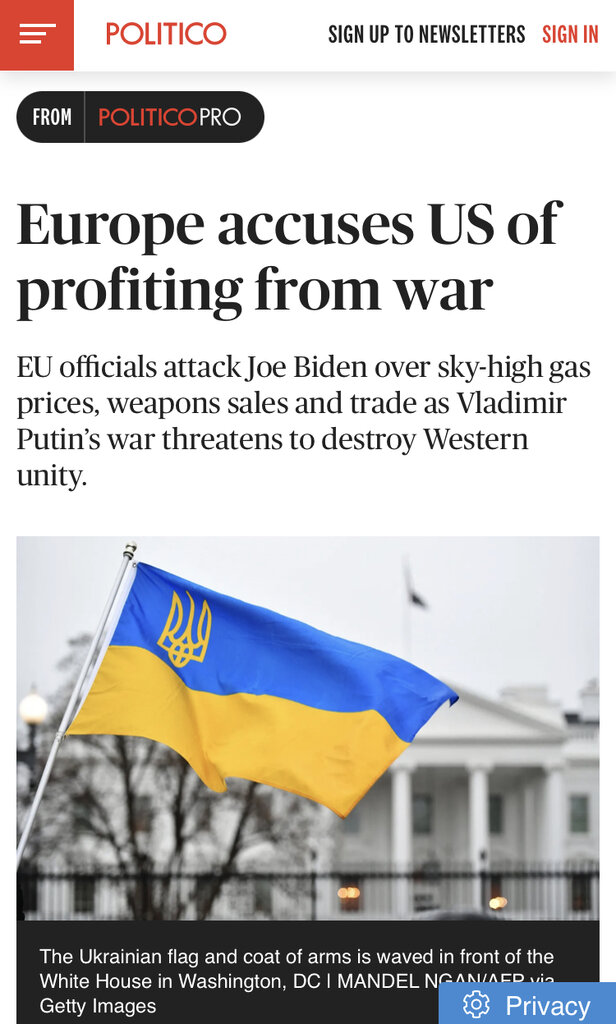 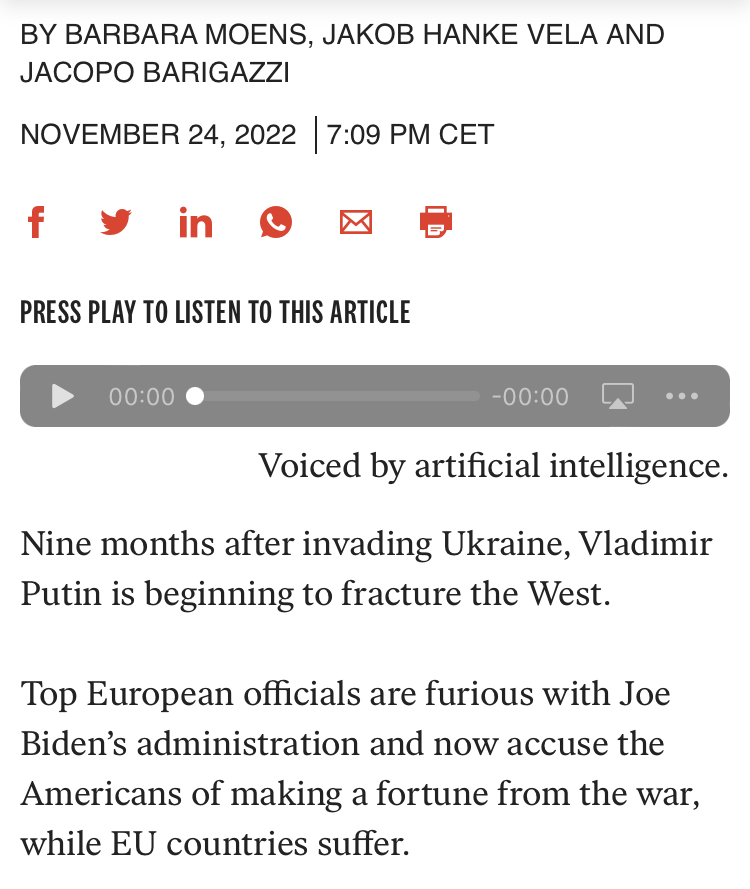 The explosive comments — backed in public and private by officials, diplomats and ministers elsewhere — follow mounting anger in Europe over American subsidies that threaten to wreck European industry. The Kremlin is likely to welcome the poisoning of the atmosphere among Western allies.

“We are really at a historic juncture,” the senior EU official said, arguing that the double hit of trade disruption from U.S. subsidies and high energy prices risks turning public opinion against both the war effort and the transatlantic alliance. “America needs to realize that public opinion is shifting in many EU countries.”

Another top official, the EU’s chief diplomat Josep Borrell, called on Washington to respond to European concerns. “Americans — our friends — take decisions which have an economic impact on us,” he said in an interview with POLITICO.

The U.S. rejected Europe's complaints. “The rise in gas prices in Europe is caused by Putin’s invasion of Ukraine and Putin's energy war against Europe, period," a spokesperson for Biden's National Security Council said. Exports of liquefied natural gas from the U.S. to Europe "increased dramatically and enabled Europe to diversify away from Russia," the NSC spokesperson said.

The biggest point of tension in recent weeks has been Biden’s green subsidies and taxes that Brussels says unfairly tilt trade away from the EU and threaten to destroy European industries. Despite formal objections from Europe, Washington has so far shown no sign of backing down.

At the same time, the disruption caused by Putin’s invasion of Ukraine is tipping European economies into recession, with inflation rocketing and a devastating squeeze on energy supplies threatening blackouts and rationing this winter.

As they attempt to reduce their reliance on Russian energy, EU countries are turning to gas from the U.S. instead — but the price Europeans pay is almost four times as high as the same fuel costs in America. Then there’s the likely surge in orders for American-made military kit as European armies run short after sending weapons to Ukraine.

It's all got too much for top officials in Brussels and other EU capitals. French President Emmanuel Macron said high U.S. gas prices were not “friendly” and Germany’s economy minister has called on Washington to show more “solidarity” and help reduce energy costs.

Ministers and diplomats based elsewhere in the bloc voiced frustration at the way Biden’s government simply ignores the impact of its domestic economic policies on European allies.

When EU leaders tackled Biden over high U.S. gas prices at the G20 meeting in Bali last week, the American president simply seemed unaware of the issue, according to the senior official quoted above. Other EU officials and diplomats agreed that American ignorance about the consequences for Europe was a major problem.

"The Europeans are discernibly frustrated about the lack of prior information and consultation," said David Kleimann of the Bruegel think tank.

Officials on both sides of the Atlantic recognize the risks that the increasingly toxic atmosphere will have for the Western alliance. The bickering is exactly what Putin would wish for, EU and U.S. diplomats agreed.

The growing disputeover Biden’s Inflation Reduction Act (IRA) — a huge tax, climate and health care package — has put fears over a transatlantic trade war high on the political agenda again. EU trade ministers are due to discuss their response on Friday as officials in Brussels draw up plans for an emergency war chest of subsidies to save European industries from collapse.

"The U.S. is following a domestic agenda, which is regrettably protectionist and discriminates against U.S. allies," said Tonino Picula, the European Parliament's lead person on the transatlantic relationship.

An American official stressed the price setting for European buyers of gas reflects private market decisions and is not the result of any U.S. government policy or action. "U.S. companies have been transparent and reliable suppliers of natural gas to Europe," the official said. Exporting capacity has also been limited by an accident in June that forced a key facility to shut down.

In most cases, the official added, the difference between the export and import prices doesn't go to U.S. LNG exporters, but to companies reselling the gas within the EU. The largest European holder of long-term U.S. gas contracts is France's TotalEnergies for example.

The NSC spokesperson quoted above added: "The increase in global LNG supplies, led by the United States, helped European allies and partners get storage levels to an encouraging place ahead of this winter, and we will continue to work with the EU, its members, and other European countries to ensure sufficient supplies will be available for winter and beyond.”

It’s not a new argument from the American side but it doesn’t seem to be convincing the Europeans. "The United States sells us its gas with a multiplier effect of four when it crosses the Atlantic," European Commissioner for the Internal Market Thierry Breton said on French TV on Wednesday. "Of course the Americans are our allies ... but when something goes wrong it is necessary also between allies to say it."

Cheaper energy has quickly become a huge competitive advantage for American companies, too. Businesses are planning new investments in the U.S. or even relocatingtheir existing businesses away from Europe to American factories. Just this week, chemical multinational Solvay announced it is choosing the U.S. over Europe for new investments, in the latest of a series of similar announcements from key EU industrial giants.

Despite the energy disagreements, it wasn't until Washington announced a $369 billion industrial subsidy scheme to support green industries under the Inflation Reduction Act that Brussels went into full-blown panic mode.

“The Inflation Reduction Act has changed everything," one EU diplomat said. "Is Washington still our ally or not?”

For Biden, the legislation is a historic climate achievement. "While we understand that some trading partners have concerns with how the [electric vehicle] tax credit provisions in the IRA will operate in practice with respect to their producers, we are committed to continuing to work with them to better understand and do what we can to address their concerns," the NSC spokesperson said. "This is not a zero-sum game. The IRA will grow the pie for clean energy investments, not split it."

But the EU sees that differently. An official from France’s foreign affairs ministry said the diagnosis is clear: These are "discriminatory subsidies that will distort competition.” French Economy Minister Bruno Le Maire this week even accused the U.S. of going down China's path of economic isolationism, urging Brussels to replicate such an approach. “Europe must not be the last of the Mohicans,” he said.

The EU is preparing its responses, such as a big subsidy push to prevent European industry from being wiped out by American rivals. "We are experiencing a creeping crisis of trust on trade issues in this relationship," said German MEP Reinhard Bütikofer.

"At some point, you have to assert yourself," said French MEP Marie-Pierre Vedrenne. "We are in a world of power struggles. When you arm-wrestle, if you are not muscular, if you are not prepared both physically and mentally, you lose.”

Behind the scenes, there is also growing irritation about the money flowing into the American defense sector.

The U.S. has by far been the largest provider of military aid to Ukraine, supplying more than $15.2 billion in weapons and equipment since the start of the war. The EU has so far provided about €8 billion of military equipment to Ukraine, according to Borrell.

According to one senior official from a European capital, restocking of some sophisticated weapons may take “years” because of problems in the supply chain and the production of chips. This has fueled fears that the U.S. defense industry can profit even more from the war.

The Pentagon is already developing a roadmap to speed up arms sales, as the pressure from allies to respond to greater demands for weapons and equipment grows.

Another EU diplomat argued that “the money they are making on weapons” could help Americans understand that making “all this cash on gas” might be “a bit too much.”

The diplomat argued that a discount on gas prices could help us to "keep united our public opinions” and to negotiate with third countries on gas supplies. “It’s not good, in terms of optics, to give the impression that your best ally is actually making huge profits out of your troubles,” the diplomat said.

This article has been updated to include comments from a spokesperson for the NSC.