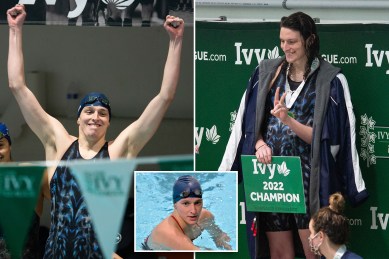 Lia Thomas, the transgender swimmer at the University of Pennsylvania, won the NCAA championships in the 500-yard race on Thursday.
Thomas defeated Virginia freshman Emma Weyant by 1.75 seconds with a time of 4:33.24.
Thomas swam for three years at Penn as a male before transitioning, sat out a year while undergoing testosterone suppression treatment and returned to compete as a woman.
She will also compete in the 200-yard and 100-yard NCAA championships later this week.
Since Thanksgiving, Thomas has been swimming at a rate that suggested she would likely win national titles. She won the Ivy League title in the 500-yard, setting a record at Harvard’s Blodgett Pool in the process in February.
Lia Thomas secured the NCAA title in the 500-yard freestyle with a 4:33.21 finish.Getty Images
Thomas has come under considerable controversy, as a number of observers have questioned the fairness of an athlete who was born as a biological male competing against women. The NCAA made new regulations about transgender athletes during this season, and essentially left eligibility up to individual sports.
Lia Thomas won the NCAA championship in women’s swimming in the 500-yard.Screengrab / ESPN3
After her victory, Thomas told ESPN she tries to tune out the noise.
“I try to ignore it as much as I can I try to focus on my swimming — what I need to do to get ready for my races. I just try to block out everything else,” Thomas said.