Romanian Bratara Buzea, 63, who was imprisoned for witchcraft under communist dictator Nicolae Ceausescu's repressive regime, displays implements during an interview with The Associated Press in Mogosoaia, Romania, Wednesday, Jan. 5, 2011. Trouble is brewing for Romania's witches, whose toil is being taxed for the first time despite their threats of putting curses on the government.

MOGOSOIA, Romania – Everyone curses the tax man, but Romanian witches angry about having to pay up for the first time are planning to use cat excrement and dead dogs to cast spells on the president and government.

Also among Romania's newest taxpayers are fortune tellers — but they probably should have seen it coming.

Superstitions are no laughing matter in Romania — the land of the medieval ruler who inspired the "Dracula" tale — and have been part of its culture for centuries. President Traian Basescu and his aides have been known to wear purple on certain days, supposedly to ward off evil.

Romanian witches from the east and west will head to the southern plains and the Danube River on Thursday to threaten the government with spells and spirits because of the tax law, which came into effect Jan. 1.

A dozen witches will hurl the poisonous mandrake plant into the Danube to put a hex on government officials "so evil will befall them," said a witch named Alisia. She identified herself with one name — customary among Romania's witches.

"This law is foolish. What is there to tax, when we hardly earn anything?" she said by telephone Wednesday. "The lawmakers don't look at themselves, at how much they make, their tricks; they steal and they come to us asking us to put spells on their enemies."

The new law is part of the government's drive to collect more revenue and crack down on tax evasion in a country that is in recession.

In the past, the less mainstream professions of witch, astrologer and fortune teller were not listed in the Romanian labor code, as were those of embalmer, valet and driving instructor. Those who worked those jobs used their lack of registration to evade paying income tax.

Under the new law, like any self-employed person, they will pay 16 percent income tax and make contributions to health and pension programs.

Some argue the law will be hard to enforce, as the payments to witches and astrologers usually are made in cash and relatively small at 20 to 30 lei ($7-$10) per consultation.

Mircea Geoana, who lost the presidentical race to Basescu in 2009, performed poorly during a crucial debate, and his camp blamed attacks of negative energy by their opponent's aides.

Geoana aide Viorel Hrebenciuc alleged there was a "violet flame" conspiracy during the campaign, saying Basescu and other aides dressed in purple on Thursdays to increase his chance of victory. They continue to be seen wearing purple clothing on important days, because the color supposedly makes the wearer superior and wards off evil.

Such spiritualism has long been tolerated by the Orthodox Church in Romania, and the late Communist dictator Nicolae Ceausescu and his wife, Elena, had their own personal witch.

Queen witch Bratara Buzea, 63, who was imprisoned in 1977 for witchcraft under Ceausescu's repressive regime, is furious about the new law.

Sitting cross-legged in her villa in the lake resort of Mogosoaia, just north of Bucharest, she said Wednesday she planned to cast a spell using a particularly effective concoction of cat excrement and a dead dog, along with a chorus of witches.

"We do harm to those who harm us," she said. "They want to take the country out of this crisis using us? They should get us out of the crisis because they brought us into it."

"My curses always work!" she cackled in a smoky voice. She sat next to her wood-burning stove, surrounded by potions, charms, holy water and ceramic pots.

Not every witch is threatening fire and brimstone.

"This law is very good," said Mihaela Minca. "It means that our magic gifts are recognized and I can open my own practice." 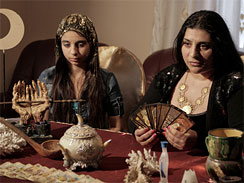