Dmitry Mevdvedov has been a strong supporter of the Jewish community during his current service. Last week he spent a few hours with Jewish community leaders, discussing the development of Jewish life and the fight against Anti-Semitism in Russia. The meeting was headed by Russia's Chief Rabbi Berel Lazar at the Moscow Jewish Community center.The visit began with the top official publicly congratulating the Jewish community of Russia and Chief Rabbi of Russia Berel Lazar on the occasion of Chanukah and proceeded with a meeting about religious education, the perfecting legislation on education, and the functioning of institutions of higher education.

Chief Rabbi of Russia Berel Lazar and Alexander Boroda, the Chairman of the Board for the Federation of Jewish Communities of Russia, hosted Mr. Medvedev and numerous other guests – Russia's Education Minister Andrei Fursenko and leaders of Jewish higher education institutions. The First Deputy Prime Minister began by addressing the threat of extremist propaganda – neo-Nazism, anti-Semitism and chauvinism. "These phenomena exist; we must not close our eyes to them. It is the state's role to clearly and rigidly fight these manifestations," stated Mr. Medvedev.
Kliknite za proširenje... 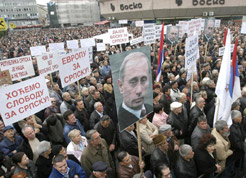