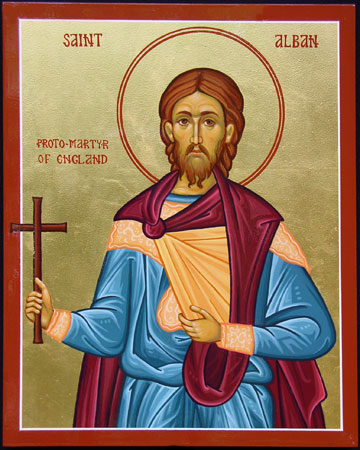 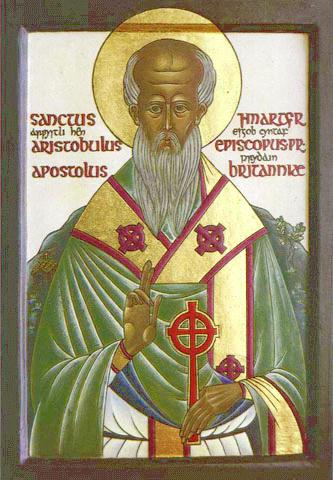 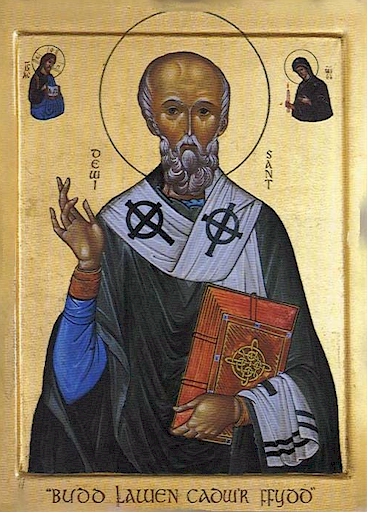 The Holy Hierarch David of Wales,Bishop of Menevia (†601) 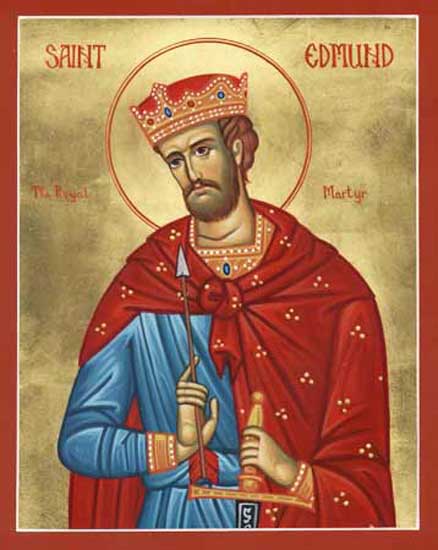 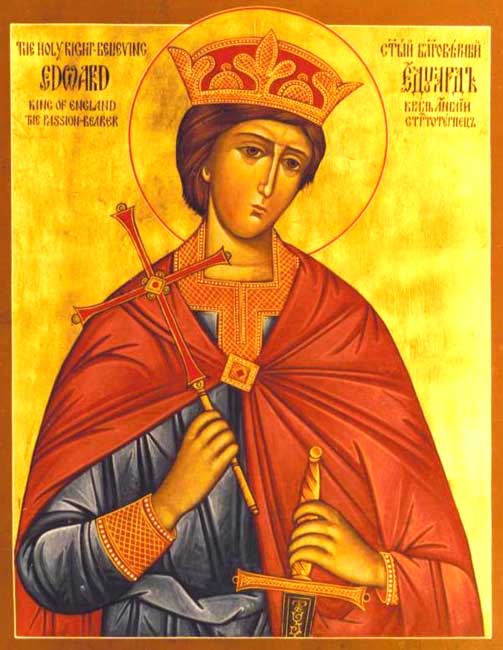 THE BEGINNINGS OF NATIONAL UNITY OF ENGLAND

Before his death, King Penda admitted Saint Aidan’s missionary monks to Mercia, thus paving the way for the conversion of this Saxon kingdom. His son was Baptised and married a Christian Princess. For most of the next century the Kingdom of Mercia, with its territory running south from the Humber to the Thames and from the Welsh Borders to the Wash was in the ascendant. Mercia’s supremacy culminated in the reign of his cousin, King Offa (757-96).

King Offa is regarded as the first King to be termed King of all England. He dealt with his younger European contemporary, the Emperor Charlemagne as an equal, signing a commercial treaty with him in 796, while Charlemagne is recorded as having regarded him as an outstanding ruler.

In 850-851 the heathen Danish raiders, who had for some time contented themselves with summer raids, decided to winter on the Isle of Thanet. This was in effect the beginning of the terrible Danish invasion which was to provide the Church with so many martyrs, especially in the year 870.

King Alfred eventually defeated the Danes and consolidated his rule, maintaining peace until the Danes attacked from France again in 892. He finally directed their defeat in 896-7.

Both Offa and Alfred were law-makers, scholars in their own right, Christian Kings, who built a school system and generally encouraged learning and the extension of the Church.

The Orthodoxy of the Church in the British Isles ceased with the introduction of papal bishops after the Battle of Hastings in October of 1066 at which the Norman Duke William, funded by the newly schismatic papacy invaded Britain


The Battle of Hastings

On October 5, Harold was back in London with his exhausted army. Common sense dictated that he stay there until the levies he had summoned arrived; but instead, to the puzzlement of commentators from the eleventh to the twentieth centuries, he pushed on by a forced march of fifty to sixty miles south, after only a few days' rest and without the much needed reinforcements. What was the reason for this crucial tactical blunder?150

David Howarth has argued convincingly that the reason was that Harold now, for the first time, heard (from an envoy of William's) that he and his followers had been excommunicated by the Pope and that William was fighting with the pope's blessing and under a papal banner, with a tooth of St. Peter encrusted in gold around his neck. "This meant that he was not merely defying William, he was defying the Pope. It was doubtful whether the Church, the army and the people would support him in that defiance: at best, they would be bewildered and half-hearted. Therefore, since a battle had to be fought, it must be fought at once, without a day's delay, before the news leaked out. After that, if the battle was won, would be time to debate the Pope's decision, explain that the trial had been a travesty, query it, appeal against it, or simply continue to defy it...

"... This had become a private matter of conscience. There was one higher appeal, to the judgment of God Himself, and Harold could only surrender himself to that judgment: 'May the Lord now decide between Harold and me' [William had said]. He had been challenged to meet for the final decision and he could not evade it; in order that God might declare His judgment, he was obliged to accept the challenge in person.

"He left London in the evening of 12 October. A few friends with him who knew what had happened and still believed in him: Gyrth and his brother Leofwine, his nephew Hakon whom he had rescued from Normandy, two canons from Waltham already nervous at the miracle they had seen, two aged and respected abbots who carried chain mail above their habits, and - perhaps at a distance - Edith Svanneshals, the mother of his sons. He led the army, who did not know, the remains of his house-carls and whatever men of the fyrd had already gathered in London. The northern earls had been expected with contingents, but they had not come and he could not wait. He rode across London Bridge again and this time down the Dover road to Rochester, and then by the minor Roman road that plunged south through the Andredeswald - the forest now yellow with autumn and the road already covered with fallen leaves. The men of Kent and Sussex were summoned to meet at an ancient apple tree that stood at the junction of the tracks outside the enclave of Hastings. Harold reached that meeting place late on Friday 13, ready to face his judgment; and even while the army was forming for battle, if one may further believe the Roman de Rou, the terrible rumour was starting to spread that the King was excommunicated and the same fate hung over any man who fought for him." 151

The only military advantage Harold might have gained from his tactics -that of surprise - was lost: William had been informed of his movements. Andso, as the Anglo-Saxon Chronicle says, it was William who, early on the morning of October 14, "came upon him unexpectedly before his army was set in order. Nevertheless the king fought against him most resolutely with those men who wished to stand by him, and there was great slaughter on both sides. King Harold was slain, and Leofwine, his brother, and Earl Gurth, his brother, and many good men. The French had possession of the place of slaughter, as God granted them because of the nation's sins..."152

Why did the chronicler say: "with those men who wished to stand by him"?

Because many did not wish to stay with him when they learned of the Pope]s anathema. And yet many others stayed, including several churchmen.

Why did they stay, knowing that they stood to lose, not only their bodies, but also, if the anathema was true - their eternal souls? Very few probably knew about the schism of 1054 between Rome and Constantinople or about the theological arguments - over the Filioque, over unleavened bread at the Liturgy, over the supposed universal jurisdiction of the Pope - that led to the schism of 1054. Still fewer, if any, could have come to the firm conclusion that Rome was wrong and Constantinople was right. That Harold had perjured himself in coming to the throne was generally accepted - and yet they stayed with him.

In following King Harold, the Englishmen who fought and died at Hastings were following their hearts rather than their heads. Their hearts told them that, whatever the sins of the king and the nation, he was still their king and this was still their nation. Surely God would not want them to desert these at the time of their greatest need, in a life-and-death struggle against a merciless foreign invader?

Perhaps they remembered the words of Archbishop Wulfstan of York: "By what means shall peace and comfort come to God's servants and God's poor, but through Christ and through a Christian king?"153 Almost certainly they were drawn by a grace-filled feeling of loyalty to the Lord's Anointed; for the English were exceptional in their continuing veneration for the monarchy, which in other parts had been destroyed by the papacy.154

The English might also have reflected that this day, October 14, was the feast of St. Callistus, a third-century Pope who was considered by many Roman Christians of his time (including St. Hippolytus) to be a schismatic anti-pope. If that Pope could have been a schismatic, was there not much more reason to believe that this one was schismatic, too, being under the anathema of the Great Church of Constantinople and presuming as he did to dispose of kingdoms as he did churches and blessing the armed invasion of peaceful Christian countries by uninvited foreigners? And if so, then was it not they, the Normans, who were the schismatics, while the true Christians were those who refused to obey their false decrees and anathemas?

In any case, after the battle very few Englishman fled to Old Rome, the traditional refuge of English exiles. They preferred, as we have seen, the Orthodox capitals of Constantinople and Russia!

The Last Stand of the English

In 1071 the last remnants of the English resistance, led by Earls Edwin, Morcar and Siward and Bishop Ethelwine of Durham, sought refuge in the island monastery of Ely in East Anglia. There, under the leadership of Hereward the Wake, they made frequent sallies against William's men. When William heard of this, he invested the island and started to build a causeway towards it. However, Hereward's men put up a strong resistance, and the "most Christian" King William then resorted to a most infamous tactic - he called in a witch, put her onto a tower over the fens and ordered her to cast spells on the English. But this, too, failed to work - the English launched a successful counter-attack, and the witch fell from her tower and broke her neck. Finally, it was through the abbot and monks (with the connivance of Early Morcar) that William conquered the stronghold; for, considering it "their sacred duty," as the Book of Ely put it, "to maintain their magnificent temple of God and St. Etheldreda", they came to terms with William, and in exchange for promises that their lands would be restored and confirmed, they guided the Normans secretly into the rebel stronghold. 167

Hereward and his men made their escape; but others were not so fortunate. As Kightly writes, many must have wondered "whether surrender had beensuch a good idea after all. 'The king caused all the defenders to be brought before him, first the leaders and then anyone else of rank or fame. Some he sent to perpetual imprisonment' - among them the deluded Morcar, Siward and Bishop Aethelwine - 'others he condemned to lose their eyes, their hands or their feet' - William rarely hanged men, preferring to give them time for repentance - 'while most of the lesser folk he released unpunished.' Then, to ensure that Ely would not trouble him again, he ordered that a castle be built in the monastic precinct (where its mound still stands)..."168

Next, going to the abbey, 'he stood as far as possible from the tomb of the holy Etheldreda, and threw a gold piece to her altar: he dared not go any closer, because he feared the judgment of God on the wrong he was doing to her shrine.' And well he might, for though the monks kept their estates and their English abbot, King William soon found an excuse to levy an immense fine on them, so that they were forced to sell almost all the adornments of their church: when their payment proved a few coins short, he increased his demands still further, and they lost the few treasures that remained. 'But even after all this,' mourns the Ely Book, 'no one believed that they would be left in peace' - and nor were they."169

After further adventures, Hereward was eventually reconciled with William. However, another English leader, Earl Waltheof, was not so fortunate. He had joined a conspiracy of Normans and Saxons which was defeated in battle, and was executed at Winchester on May 31, 1076, just as he finished praying: "... and lead us not into temptation." "And then, goes the story, in the hearing of all, the head, in a clear voice, finished the prayer, 'But deliver us from evil. Amen.'"170 He was buried at Crowland, and according to Abbot Wulfketyl of Crowland many miracles took place at his tomb, including the rejoining of his head to his body. 171 However, veneration of him as a saint was not permitted by the Norman authorities: Wulketyl was tried for idolatry (!) before a council in London, defrocked, and banished to Glastonbury...172