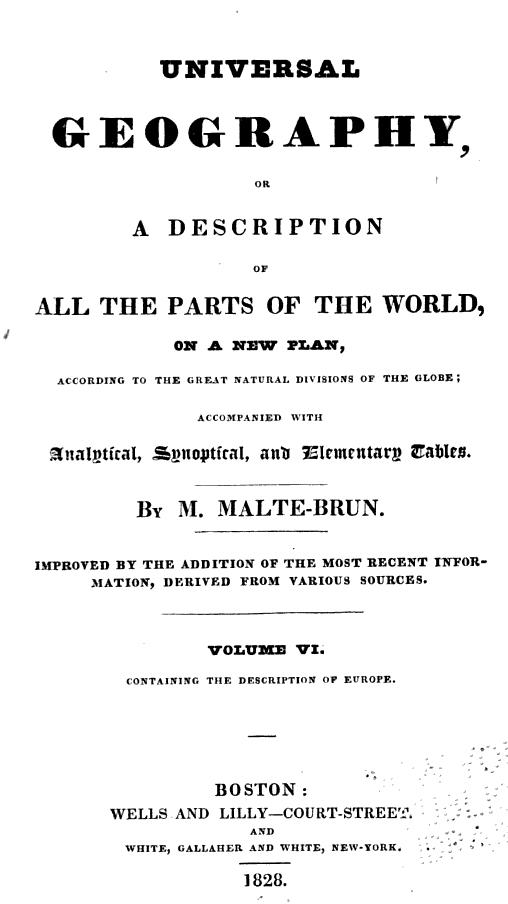 It has often been a matter of wonder how the Slavonians, worn out by so many destructive wars, could have peopled all Illyria with their numerous hordes; the Servians and Bosnians, it is thought, found and mingled with an ancient nation of the same origin as themselves on their arrival in the country during the sixth century. Dolce maintains boldly that Illyria was the native country of the people whose colonists now occupy the whole of Poland and Russia; his arguments were too hastily rejected by the celebrated Adelung(1). [Conrad Malte-Brun: Universal Geography, Or, a Description of All the Parts of the World, on a New Plan: Europe, Turkey, Hungary, and Russia, A. Black, 1827, str 220]

We do not mean to affirm that the Proto-Slavonians scattered in Thrace, Illyria and Pannonia were not distinguished by their manners customs and language from the Venedi, Lygii, Vindili, Karpi and other northern Slavonic states. They might have differed from them as much as the Pelasghi differed from the Hellenes, the Etruscans from the Latins, and the Romans in the time of Romulus from those in the age of Augustus; they might have lived among the Thracian nations or mixed with the Illyrian Romans or been oppressed by the powerful Celtic hordes; but the existence of the Proto-Slavonians both in the countries watered by the Save and the Drave and in those near the Strymon (Struma) and the Hebrus (Marica), is a fact of which history affords abundant evidence. [Conrad Malte-Brun: Universal Geography, Or, a Description of All the Parts of the World, on a New Plan: Europe, Turkey, Hungary, and Russia, A. Black, 1827, str 222] 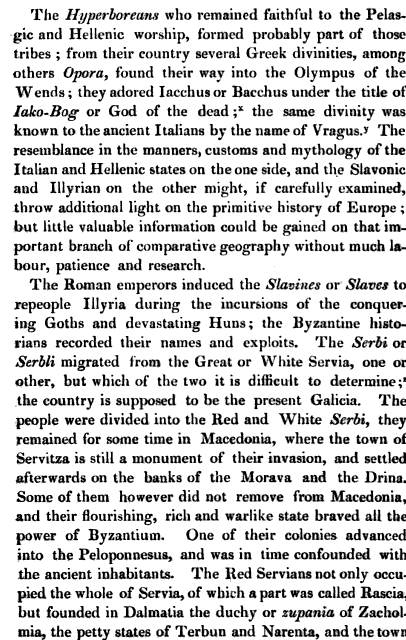 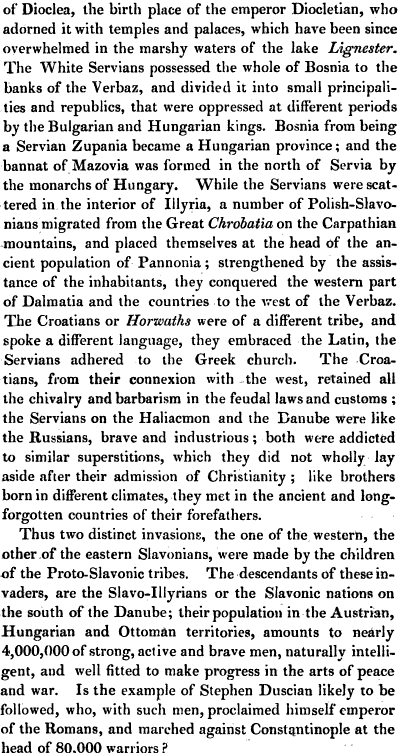 The Hyperboreans who remained faithful to the Pelasgic and Hellenic worship, formed probably part of those tribes; from their country several Greek divinities, among others Opora, found their way into the Olympus of Wends; they adored Iacchus or Bacchus under the title Iako-Bog or God of the dead(x); the same divinity was known to the ancient Italians by the name of Vragus.(y) The resemblance in the manners, customs and mythology of the Italian and Hellenic states on the one side, and the Slavonic and Illyrian on the other might, if carefully examined, throw additional light on the primitive history of Europe; but little valuable information could be gained on that important branch of comparative geography without much labour, patience and research.

The Roman emperors induced the Slavines or Slaves to repeople Illyria during the incursions of the conquering Goths and devastating Huns; the Byzantine historians recorded their names and exploits. The Serbi or Serbli migrated from the Great or White Servia, one or other, but which of the two it is difficult to determine(z); the country is supposed to be the present Galicia. The people were divided into the Red and White Serbi, they remained for some time in Macedonia, where the town Servitza is still a monument of their invasion, and settled afterwards on the banks of the Morava and the Drina. Some of them however did not remove from Macedonia, and their flourishing, rich and warlike state braved all power of Byzantium. One of their colonies advanced into the Peloponnesus, and was in time confounded whith the ancient inhabitants. The Red Servians not only occupied the whole of Servia, of which a part was called Rascia, but founded in Dalmatia the duchy or zupania of Zacholmia, the petty states of Terbun and Narenta and the town of Dioclea, the birth place of the emperor Diocletian, who adorned it with temples and palaces, which have been since overwhelmed in the marshy waters of the lake Lignester.

The White Servians possessed the whole of Bosnia to the banks of the Verbaz, and divided it into small principalities and republics, that were oppressed at different periods by the Bulgarian and Hungarian kings. Bosnia from being a Servian Zupania became a Hungarian province; and the bannat of Mazovia was formed in the north of Servia by the monarchs of Hungary.

While the Servians were scattered in the interior of Illyria, a number of Polish-Slavonians migrated from the Great Chrobatia on the Carpathian mountains, and placed themselves at the head of the ancient population of Pannonia; strengthened by the assistance of the inhabitants, they conquered the western part of Dalmatia and the countries to the west of the Verbaz. The Croatians or Horwaths were of a different tribe, and spoke a different language, they embraced the Latin, the Servians adhered to the Greek church. The Croatians, from their connexion with the west, retained all the chivalry and barbarism in the feudal laws and customs; the Servians on the Haliacmon and the Danube were like the Russians, brave and industrious; both were addicted to similar superstitions, which they did not wholly lay aside after their admission of Christianity; like brothers born in different climates, they met in the ancient and long forgotten countries of their forefathers.

Thus two distinct invasions, the one of the western, the other of the eastern Slavonians were made by the children of the Proto-Slavonic tribes. The descendants of these invaders, are the Slavo-Illyrians or the Slavonic nations on the south of the Danube; their population in the Austrian, Hungarian and Ottoman territories amounts to nearly 4,000,000 of strong, active and brave men, naturally intelligent, and well fitted to make progress in the arts of peace and war. Is the example of Stephen Duscian likely to be followed, who, with such men, proclaimed himself emperor of the Romans, and marched against Constantinople at the head of 80,000 warriors? 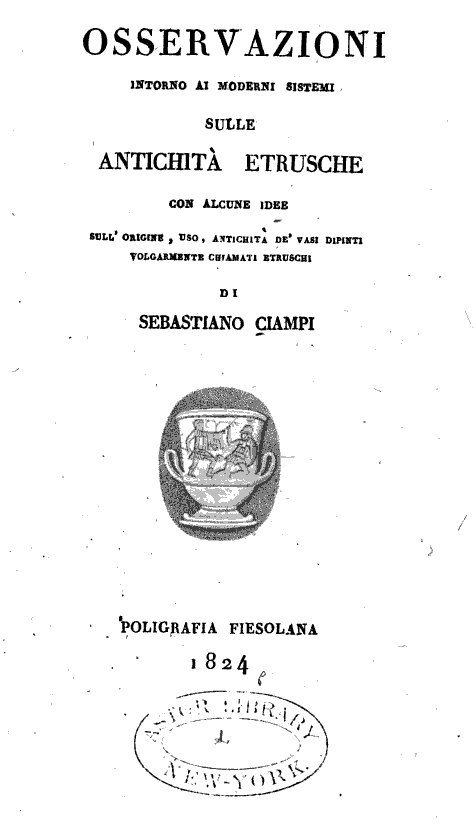 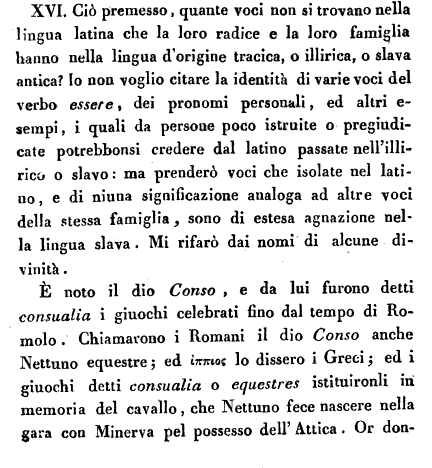 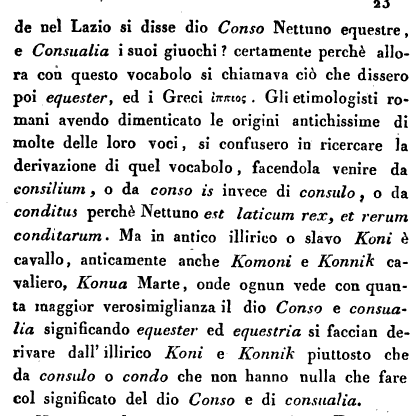 According to Suetonius, in the Lives of the Twelve Caesars (121 AD), Caligula planned to make Incitatus a consul[1], and the horse would "invite" dignitaries to dine with him in a house outfitted with servants there to entertain such events. Suetonius also wrote that the horse had a stable of marble, with an ivory manger, purple blankets, and a collar of precious stones. 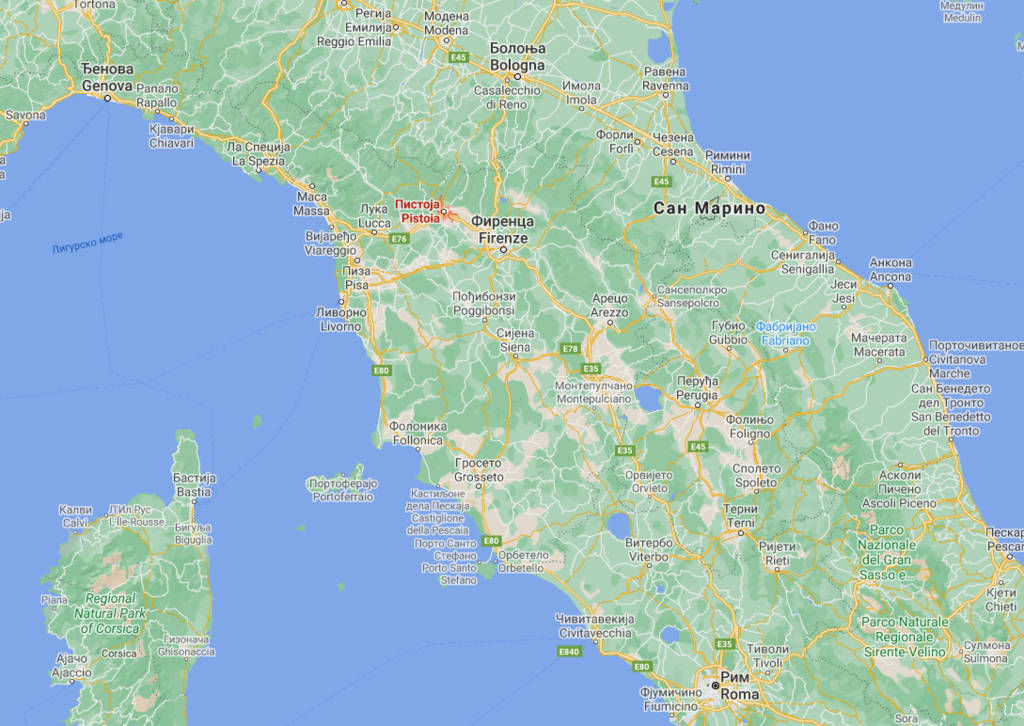 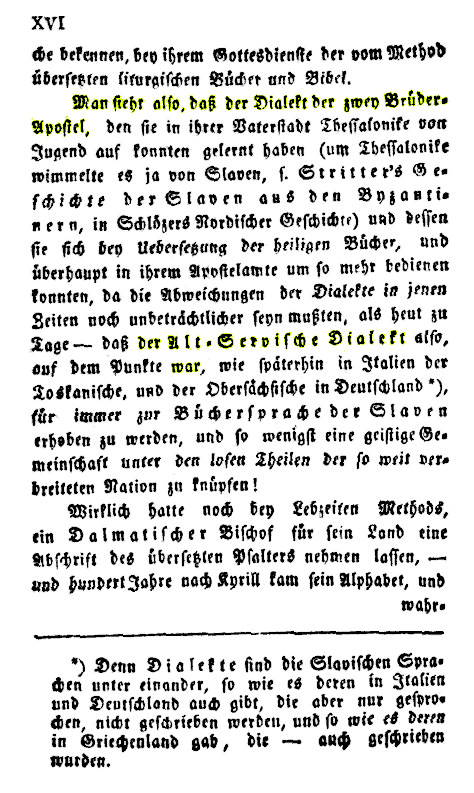 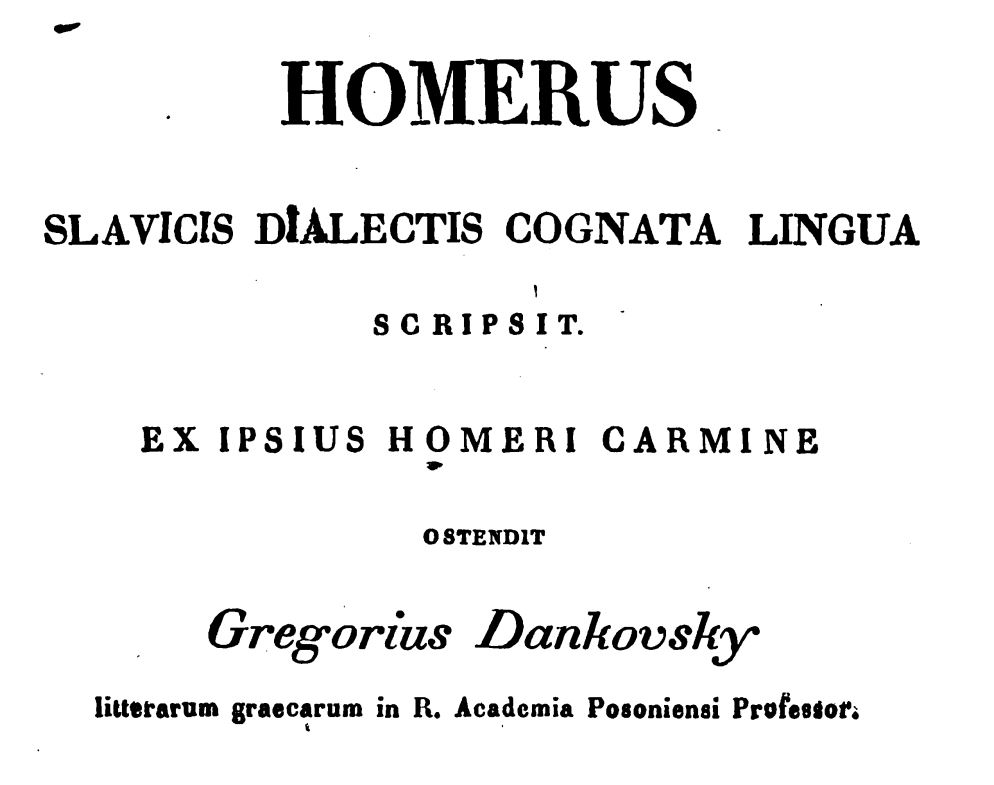 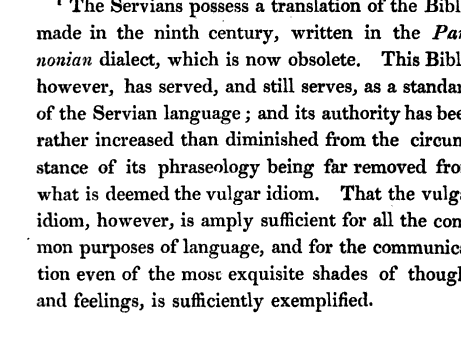 Sir John Bowring: Servian popular poetry (1827), str xxi
' The Servians possess a translation of the Bible, made in the ninth century, written in the Pannonian dialect, which is now obsolete. This Bible, however, has served, and still serves, as a standard of the Servian language ; and its authority has been rather increased than diminished from the circumstance of its phraseology being far removed from what is deemed the vulgar idiom. That the vulgar idiom, however, is amply sufficient for all the common purposes of language, and for the communication even of the most exquisite shades of thought and feelings, is sufficiently exemplified. 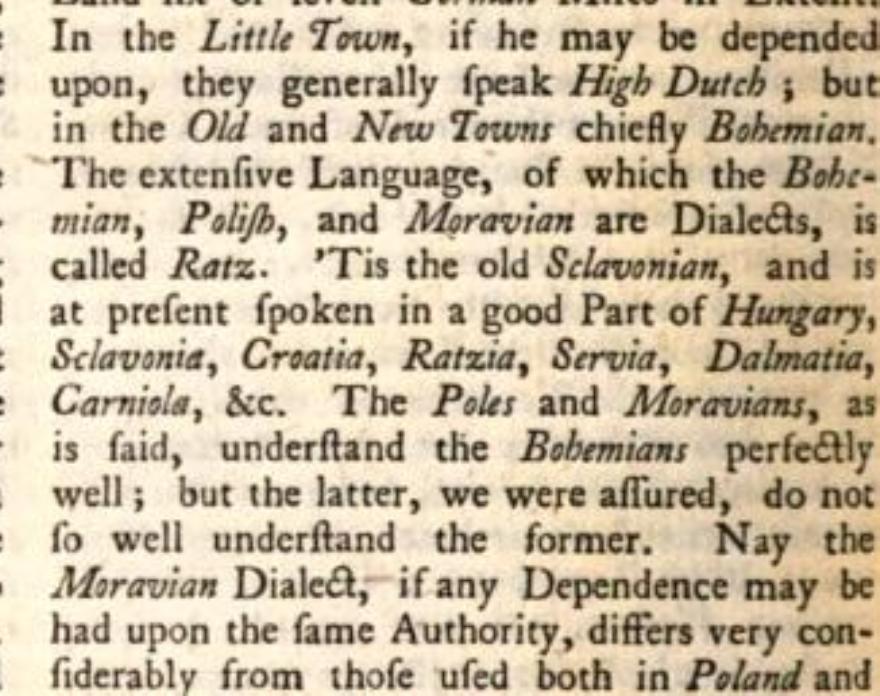 The Croatian original, entitled “Kako su Hrvati nazivali svoj jezik,” appeared in the journal Kolo, 9, nos. 1-2 (Zagreb, 1971), 93-118. The final two paragraphs (pp. 117-118), which briefly covered the 19th and 20th centuries, were not translated for this volume. The translators would like to thank Diane Fai who read the manuscript and provided suggestions to improve the translation. Where possible the translators have provided the reader with more detailed footnotes.

A document from 1670 tells us that, in Moldavia, there were Bulgars, Serbs, and Bosnian Christians who “did not cultivate any other language except Illyrian and Turkish” (“nullam aliam linguam colentes paeter Illyricam et Turcicam”). Another document states that Albanians, who were also emigrés, used their own language, but also “the Slavic or Illyrian language” (“della Slava ancora o vero Illirica”). On 10 July 1637, Franjo Markanić of Čiprovac (in Bulgaria) wrote “to father Rafael Croat” (“al padre Raffaele Croato”) [This is the previously mentioned Rafael Levaković whose Glagolitic editions were printed for use in the church. This information is significant as it reveals the ties which existed between these Croatian priests and especially because of the fact that Markanić also called Levaković Croat, just as he called himself.] about the printing of church books for the Eastern rite “which are written in Serbian letters called so after St. Cyril, in the old Illyrian language” (“quali libri sono scritti in carattere Serviano detto di s. Cirillo, nella lingua illirica antica”). From these few quotations, we can see that a number of different names were used to identify the language, just as was found among Croats in Croatian regions. This should not surprise us since they kept in contact with each other and since the propaganda among these emigrés was run by the pope’s curia. With regards to the term Illyrian (ilirski), it was used in a wider context, as in it was included Bulgarian, Church Slavonic (lingua illirica antica), and also Cyrillic which was called the Illyrian script (ilirsko pismo). Among these Croats, one is cited whose name also contained the addition of Croat (Hrvat). In 1644, Catholic merchants of Kraljevo requested that the monastery in Trgovište be handed over to the friars from Bulgaria. Among the signatures was found “Gvozdeni [Iron] Ivan Harvatin”. {In 1582, Pope Gregory XIII instructed friar Bonifacija of Dubrovnik, Bishop of Ston, about his duties during his visit of Catholics in Turkey. In this document, he stated that published Protestant books had been spread throughout Illyria and that they were printed in the Slavonic language in Cyrillic (“anco in lingua schiavona et Ciurula”). The Pope sent the friar church books in Latin and Italian and a few in Greek. He further stated, that it would be easier to translate from Italian into the “Illyrian language” (“nella lingua illirica”), while in another place, he said “the Cyrillic language” (“la lingua ciurula”), but he also made a distinction “in dette lingue illirica et ciurula”. Here apparently the meaning of the terms language and script were interchangeable. The same year, in the instructions given to Augustin Quintiu, Bishop of Korčula, it was recommended that he take with him someone of the same ethnicity and who knows Illyrian (“che siano de la sua nazione et lingua illirica”). He was also sent books printed in the Illyrian language in the Roman script (“si dano a lei dottrine christiane stampate in lingua illirica con caratteri latini mille...”). Acta Bosnae, pp. 324, 333, 334, 335, 336.}