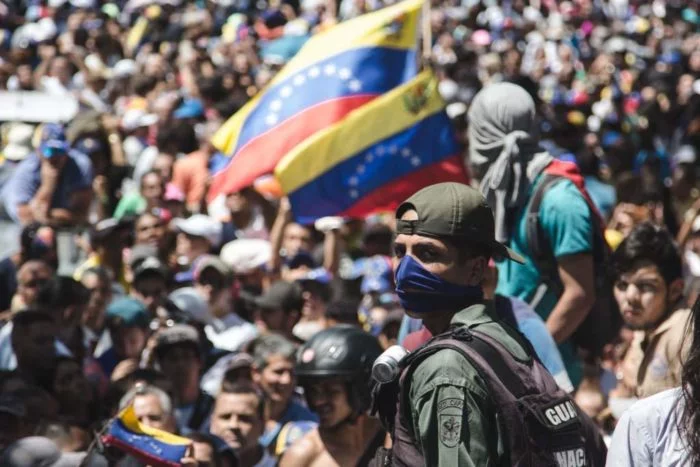 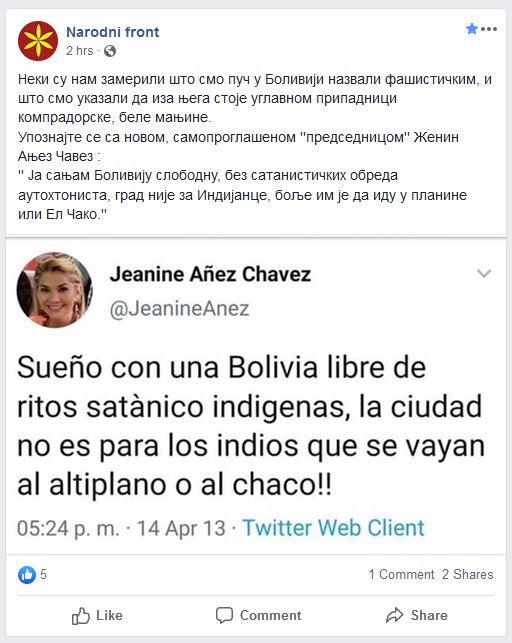 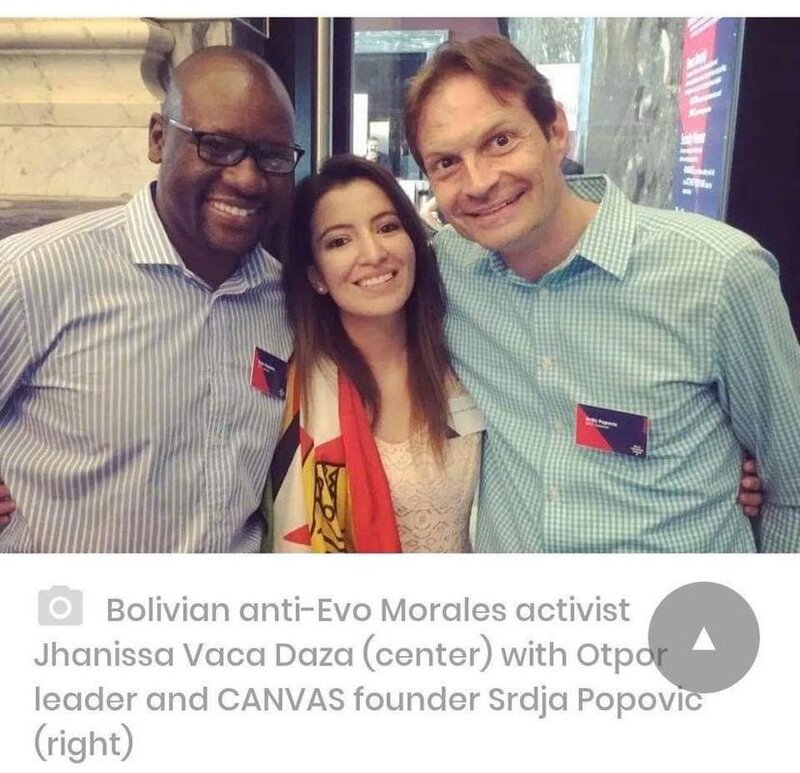 Socialism doesn’t work? An emerging middle class of Bolivians would beg to differ. Cable cars over La Paz connect the southern hillside with the city center. (JORGE BERNAL/AFP/Getty Images)
By
Anthony Faiola
Oct. 16, 2019 at 12:00 p.m. GMT+2
LA PAZ, Bolivia — People in this high-altitude metropolis once schlepped to work through the mud. Now they commute via Disney-esque aerial cable cars. Brick hovels have been replaced by whimsical mansions. The poorest are reveling in a basic convenience they lacked before massive investment in state infrastructure: indoor toilets.
“We used to do our ‘business’ in bags, and bring them down to the river,” said Vidal Colorado Mamani, community association president in Huancané, an indigenous neighborhood in southern La Paz. “It was humiliating.
“Now we have the dignity of toilets. Our lives are nothing like they were before.”
For years now, opponents of socialism have pointed at collapsing Venezuela as Exhibit A in the argument against the political left. But here in the shadow of the Andes, Bolivians are living the mirror image: an upwardly mobile society where, at least on paper, socialism has worked.
Critics of President Evo Morales, a 59-year-old socialist whose image pops up on T-shirts in left-wing cafes from La Paz to Paris, say Bolivia’s first indigenous head of state has co-opted its young democracy, weakened its institutions and abused his authority to run for another term in office .
But 13 years after his Movement for Socialism won at the ballot box, it’s indisputable that Bolivians are healthier, wealthier, better educated, living longer and more equal than at any time in this South American nation’s history.
As Morales seeks a fourth term in elections Sunday, his Bolivia is serving as a counterpoint to Venezuela in the hemispheric debate over socialism — a now-loaded word that has become a flash point in the U.S. presidential race.
“The state will not be able to solve all problems,” Morales told The Washington Post. “The state as the head of investment, accompanied by the private sector — that is the model of socialism we have.”
In socialist Venezuela, a crisis of faith not in just their leader but their economic model

A pedestrian walks past a cutout figure of President Evo Morales in La Paz. (David Mercado/Reuters)
Morales came to power with Chávez, Correa and Kirchner
If Morales has talked at times like a militant, he has behaved like a pragmatist — nationalizing firms such as the communications giant Entel, while allowing private competition to keep it on its toes.
Bolivia’s socialism lite has led to distortions and left some private firms crying foul. The country was the poorest in South America when Morales took office in 2006. By most measures, it still is.
“We still have children dying of malnutrition,” said Shirley Franco Rodríguez, a vice presidential candidate now challenging Morales’s socialists. “What we are seeing is the Venezuela-ization of Bolivia. We will have an economic collapse if Morales does not go.”
Yet under Morales, data shows, Bolivia’s economy is closing the gap with the rest of the continent, growing faster than most neighbors over the past 13 years. Meanwhile, governments that have embraced market policies — notably, in Argentina and Ecuador — face economic and political chaos.
Chile, the South American model for capitalism’s success, still reigns as the region’s richest and most stable economy. Yet even the International Monetary Fund, that champion of the free market, concedes that Bolivia’s socialists have been more effective in combating extreme poverty than any other South American government, slashing it from 33 percent of the population in 2006 to 15 percent in 2018.
Critics say any nation that enjoyed such a massive increase in revenue from the commodities boom could have achieved those results. Now, they note, Bolivia faces fresh challenges from the drop in the price of natural gas, the country’s largest export. After years of budget surpluses, the country is running deficits, and concern is rising that the fixed exchange rate and big-state bureaucracy are stifling any real chance of transitioning to a modern, export-oriented economy.
Morales came to power in 2006 as a member of the left-wing Latin American posse that included Venezuela’s Hugo Chávez, Ecuador’s Rafael Correa and Argentina’s Cristina Fernández de Kirchner. Now he’s the last man standing — and faces the challenge of his political life.
Morales won reelection easily in 2009 and 2014. Polls suggest he’ll have a harder time now — and could lose if the vote goes to a second round. He’s running largely on his “economic miracle”: using prudent fiscal management and state investment to transform the country.
He took a very different approach from Venezuela, headed by his close ally Chávez, and now by embattled President Nicolás Maduro (whom he still defends).
In Venezuela, the socialist state has seized 10 million acres of private land, expropriated 1,365 companies and purchased 5,000 more. Bolivia, by contrast, has avoided large-scale land seizures and nationalized just 33 companies — most of which had been state-owned before they were sold off by earlier governments.
Leftists are wobbling in South America. Here’s why Bolivia’s Evo Morales may be the last socialist standing.
Morales’s government stands accused of corruption — in one prominent case, an ex-girlfriend of the president was convicted and sentenced to 10 years; he denied wrongdoing — but not on the scale of Venezuela’s socialists. Bolivia ranks 132 of 180 nations in Transparency International’s most recent Corruption Perceptions Index, tied with neighboring Paraguay and ahead of Mexico, Guatemala, Nicaragua and Venezuela.
Billions of dollars have been funneled into infrastructure projects that have transformed society: new schools, futuristic mass transit and 3,354 miles of new roads.
“Poverty has declined substantially because of public investment, and Bolivia has outpaced most South American countries,” said John Crabtree, research associate for the Latin American Center at the University of Oxford. “It’s a transformation from a low base, but what we’ve seen is a reduction of poverty and the emergence of what some people would call a middle class.” Morales arrives at meeting with fellow leaders of several South American nations in Leticia, Colombia, last month to discuss a joint strategy for preserving the Amazon rainforest. (Fernando Vergara/AP)
‘I support Evo, but I’m no socialist’
The progress is perhaps most visible in La Paz and El Alto, cities with a combined population of 2.3 million that sit high in the snow-capped Andes mountains. Here, socialism gave new agency to Bolivia’s indigenous majority.
Ten new cable car lines built by Morales’s socialists now span the sister cities, sharply cutting commutes from poor neighborhoods to job-rich commercial zones. Entel, headquartered in a teeming business district, has thrived — turning regular profits while competing successfully against private firms to claim nearly half the national market.
Entel pays its chief executive $4,310 a month, 8.5 times more than its lowest-paid employees get. The heads of its two largest competitors make $25,862 and $12,931 — 64 and 32 times what their lowest-paid workers receive, according to government statistics.
“There are executives who want to earn a lot, but that’s not our way,” said Oscar Coca, Bolivia’s head of public works and a former chief executive of Entel. “We have encouraged competition and efficiency, but also social fairness.”
In El Alto, one of the globe’s highest cities at 13,615 feet, entire neighborhoods have been made over by a rising class of indigenous and mixed-race entrepreneurs. They say Morales broke a glass ceiling in business for nonwhite people, as state-private partnerships helped them build up their own firms.
Streets once filled with humble brick homes are now lined with “cholets” — lavish mansions with offices and living space whose whimsical designs and earthy tones hark back to the archaeological ruins of lost indigenous civilizations. The name combines the sometimes derogatory word for a traditional indigenous person — “cholo” — with “chalet.”
“I support Evo, but I’m no socialist,” said Eynar Viscarra, 42, speaking on the sprawling terrace of his home, fitted with outdoor chandeliers. The son of a bus driver now runs an import company that capitalized on the new roads to rural areas. He’s building a mall in El Alto that’s poised to bring the world’s highest-elevation branches of Nike and Adidas to a growing Bolivian middle class.
“I mean, is China socialist? I don’t think so,” he said. “Not really. Look, the point is, Bolivia is not Venezuela. We have not made their enormous mistakes.”
Using cash from the natural gas industry wrung from foreign investors — most of whom nevertheless remained profitable and have stayed in Bolivia — Morales’s government lifted up neighborhoods such as Huancané, an enclave of more than 3,000 working-class indigenous people transformed by government investment.
With new stone roads, the neighborhood is now accessible by minibus, connecting residents to the world’s highest mass transit system — the aerial cable cars. 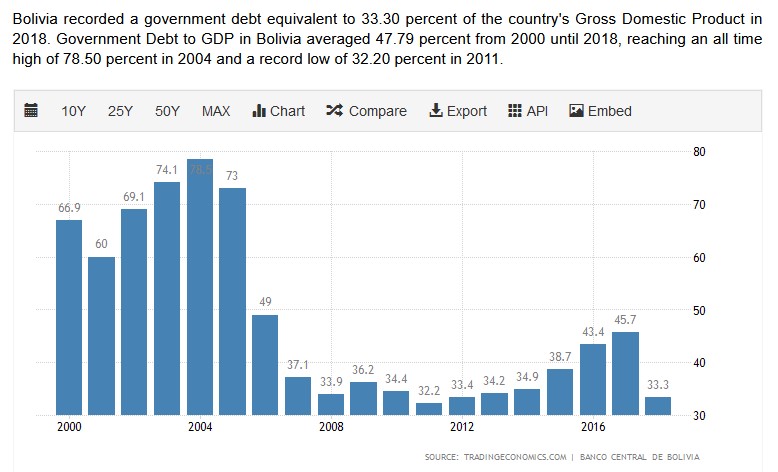