At Putin's side, an army of Jew billionaires 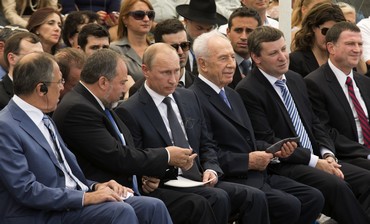 In one corner sat Mikhail Fridman, the seventh-richest man in Russia, whose fortune is estimated at $15 billion by Forbes. He stayed hydrated in the sweltering heat by sipping a glass of water.

In another stood Moshe Kantor, the chemicals tycoon who Forbes said was worth $2.3b. He repeatedly removed the beads of sweat from his head with a napkin.

The two men were part of a group of two dozen or so affluent Russian-speaking businessmen who came to the ceremony where President Vladimir Putin was the guest of honor. Some, like Fridman, flew in especially from Russia. Others, like Kantor, drove from nearby Herzliya, where many businessman from the former Soviet Union including Leonid Nevzlin and Gabriel Mirilashvili, to name a few, have made their homes.

For many members of this class of ultra rich Putin’s arrival in the country was an opportunity for them to brush shoulders with one another and to mingle with friends and officials from the motherland. The richest man in the room filled with rich men was probably the media-shy Fridman, who declined to speak to The Jerusalem Post.

“I am a private person,” he said, displaying seemingly good English.

Other faces were more familiar to locals. Lev Leviev, the diamonds and real estate mogul who is a bit of anomaly in this world, was on hand. Although born in Uzbekistan, then part of the Soviet Union, he immigrated to Israel as a teenager in the 1970s and made his money in the Jewish state. Only after the markets in the former Soviet Union opened did the Israeli, whose worth was estimated at about $1.7b. earlier this year, invest extensively in natural resources and property in that part of the world.

Not everybody in the room was a billionaire. Some were worth a mere couple of hundred of million dollars.

Alexander Levin, a Ukrainian businessman who was among those who donated to build the monument, is one of latter.

The real estate developer, who last year set up the World Forum for Russian Jewry, an advocacy group based in New York, explained why he it was an important cause.

“My two grandparents were killed during World War II so it’s very important to us,” he said. “We are paying just a little [in comparison to what they paid].”

How much is a little? Levin said the exact sum “was not important” but that it was “a lot of money.”

Members of United Israel Appeal-Keren Hayesod, which raised the money to build the marble and concrete monument overlooking the azure Mediterranean Sea, were also tight-lipped.

“We organized a group of 10 to 15 top businessmen who raised the money that helped transform this dream to reality,” said Gadi Dror, the UIA’s director of the eastern region. “We do not go [into the] figures because they [the donors] prefer not to but it is meaningful amount.”

A source later said each businessman had donated at least $100,000.

Watching the group of mega-wealthy interact, one cannot help but wonder how so many affluent businessmen in the former Soviet Union are Jewish.

German Zakharyaev, vice president of the Russian Jew Congress, cited two main reasons for that. First, Jews are few among many.

“We are a minority and as such we have to be strong [if we are] to preserve our customs,” said the businessman who, as a member of the Mountain Jewish community of the eastern Caucuses, is a minority within a minority.

“This is something in our commandments that we have to keep our Jewishness and be united in the Diaspora.”

“We think a lot and we sleep a little,” he said.