as simple as that

The Montenegrin cap (Serbian: Црногорска капа or Crnogorska kapa) is a cap traditionally worn by Montenegrins.

The cap is originally in the shape of a flat cylinder, having a red upper surface (called tepelak). identical to the Herzegovina and Lika caps. It was wholesomely red until Prince-Bishop Petar II Petrović Njegoš surrounded it with a black rim (called derevija)[1], and the definition given was as a sign of grief of occupied Kosovo, then the Kosovo myth was very popular in the old Montenegrin state. The enforcement of the cap upon the Montenegrin chieftains by Njegos was a mark of expression of then's dominating Serbian national identity[2].

The national telling recorded the most often version of the cap, defining the black wrapper as sign of grief for the once big Empire and the red the bloody defeat at the Battle of Kosovo[3] and the five small stripes on the top represent the remaining remains of the once greater Serbian realm[4], which became increasingly popular amongst the common folk during the reign of Prince Danilo I Petrović-Njegoš. Within the stripes is angled a six star, representing the last free part, Montenegro, shining upon the fallen and conquered[5]. Worn by the rulers and chieftains, the version with the Four Ocil symbol in the star's place became excessively popular amongst the ordinary people. 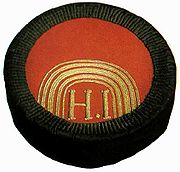 Prince Danil in the many variations introduced his initials "ДI" (Danil the 1st), while his successor Prince Nicholas in te second half of the 19th century replaced it with "Н.I", often alongside the letter "Ж" signifying "Живио" (Long live!). However for his rulers' regal caps, he reordered it to a more stylish way placing in it the Serb shield, which marked through the national-romantic interpretation "Only Unity Saves the Serbs" the desire for national unification of the Serbian people. The traditional version with the Serbian cross became the most popular and typical symbol, including the sole used after the 1918 unification with Serbia.

During the Communist era in the second half of the 20th century instead of the Serb cross the Communist Red Star was implanted between the golden stripes, although it was not fully spread amongst the people and never fully accepted. Several years ago a new version appeared with a large modern Coat of Arms of Montenegro spread across the cap's red top, that is becoming increasingly popular as a sign of the Montenegrin nation's independence and sovereignty.