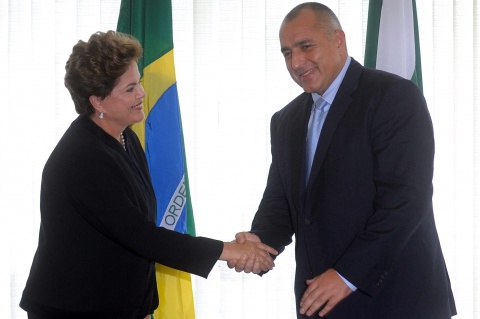 Bulgaria's Prime Minister Boyko Borisov will be one of the very few European leaders, who will attend the inauguration of Brazil's new President Dilma Rousseff, who is of Bulgarian origin, on January 1.

Rousseff will replace Brazil's popular President Luiz Inacio Lula da Silva, who was elected in 2002.
A total of 47 world figures have confirmed their attendance at the inauguration of Brazilian President-elect Dilma Rousseff, Brazil's first woman president.

More than 12 heads of state have announced their attendance at the investiture on Saturday, including the presidents of Venezuela, Bolivia, Costa Rica, El Salvador, Guatemala, and Paraguay, the Brazilian Foreign Ministry said.

The list also includes U.S. Secretary of State Hillary Clinton, Prince Felipe of Spain, South Korean Prime Minister Chung Un-chan, and the president of the Palestinian National Authority, Mahmoud Abbas, along with other African and European figures
The inaugural activities on Jan. 1 are scheduled to begin at 14:30 local time, with a convertible car taking Rousseff along an open area in front of governmnent buildings, known as Explanada de los Ministerios.

To mark the fact that it is the first time a woman will take office, the Palmares Cultural Foundation has organized a program to honor the women of the nation.

Photos of 36 notable Brazilian women and brief biographies will adorn the route to be followed by the president-elect to Planalto Palace, where she will receive the ceremonial sash from outgoing President Luiz Inacio Lula da Silva.

Rousseff will then address the people as first woman president.

Brazilian observers have commented that this is a great honor for the Bulgarian delegation, a special gesture by Dilma Rousseff to show respect for the homeland of her father.

Borisov's meeting with Dilma Rousseff was first scheduled for January 1, but the Brazilian new president reportedly insisted that she meet Borisov on Thursday, making him one of the few world leaders who will have the chance to confer with her in one week.

The Bulgarian prime minister presented Dilma Rousseff with gifts from Bulgaria and a special message from the European Union President Herman van Rompuy.

Dilma Rousseff won a "landslide" Bulgarian vote even before being elected president of Brazil - the country was gripped by a "Dilma fever" because of her Bulgarian roots.

Bulgarian media continue to shower a round-the-clock attention on Ms Rousseff, highlighting primarily the fact that she is a Bulgarian descendent.

The citizens of Gabrovo, a hard-luck but endearing Bulgarian town at the foot of the central Balkans, where the father of Brazil newly elected president Dilma Rousseff was born, are more than happy to celebrate their newfound notoriety across the Atlantic.

Dilma Rousseff's father, Peter Rousev, was born in 1900 in the town of Gabrovo, but left Bulgaria for both economic and political reasons (he was a communist), looking for a better job and a brighter future. He eventually married a Brazilian schoolteacher, the president-elect's mother, and became a relatively wealthy man.

A century later the small town in central Bulgaria has been caught up in the excitement of the presidential victory in far-away Brazil and hopes Dilma Rousseff will visit Gabrovo as President of one of the world's greatest nations and recover her roots.