Bobby Farrell, front man of the 1970s disco group Boney M, has died at the age of 61, his agent has announced.
The singer was found dead in a hotel room in St Petersburg, Russia, where he had been performing, John Seine said.
Farrell, he continued, had complained of breathing problems before and after a show on Wednesday. The cause of his death has yet to be established.
Farrell, the only male member of the popular four-piece, had been due to fly to Rome for a TV show on Friday.
Born Alfonso Farrell in Aruba, the singer left his home on the Caribbean island at 15 to work as a sailor.
He then travelled to Norway and Germany to pursue a career as a DJ.
In 1974 he was chosen to front Boney M, which was put together by German singer and songwriter Frank Farian.
'Quite bizarre'
It was he who performed much of the male vocals on the group's hit records, Farrell being more a dancer and showman than a singer. 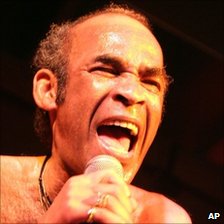 He continued to perform after Boney M disbanded in 1986
Known for his extravagant costumes, Farrell was often seen with a bare torso and tight-fitting bell-bottom pants.
Boney M had their first hit with Daddy Cool in 1978, scoring a UK number one that same year with Rivers of Babylon.